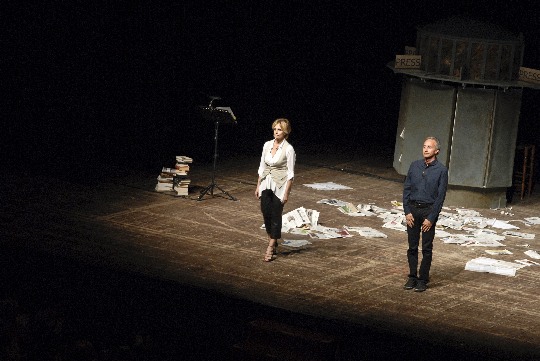 The first show of the post-Berlusconi era

By and with Marco Travaglio

Finally it’s over. He’s gone. And this is the good news. The bad news is that the radiation remains. A mountain of toxic-harmul waste that will continue to cause damage and casualties for decades. It will take a long time to break it all down: especially the so-called “information”.

Future historians studying the past two decades in the history of Italy, will think of a mysterious epidemic that “cloroformed”, “lobotomised” an entire country resulting in total anesthesia: as in the novel of Saramago “Blindness”, a country where everyone, one after the other, become blind.

The virus is a system that is the worst for us citizens, but the easiest for the power of every kind. The winner takes all. He does not govern, he commands. The supposedly controlled in fact controls everyone, even the controllers. Why should those who come after dismantle it? He did the dirty work, those who come after will simply use it.

Unless citizens wake up and discover the antidote. That’s it: those who come to this show will get the antivirus as a gift.

The only performance in Spain

The performance will be in italian

Tickets can be purchased  also in: